Everyone remembers their first.

It isn’t just a faint memory. Whether it happened last year or 30 years ago, you can probably remember everything about the experience. I’m talking about your first concert. 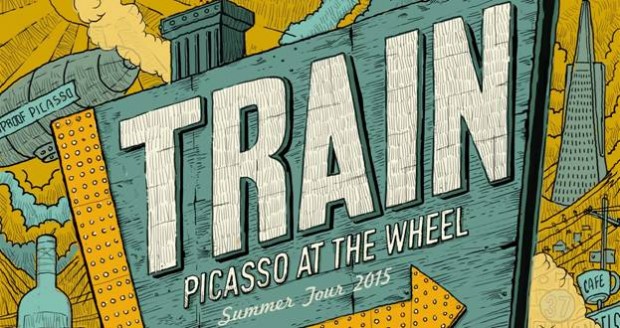 Last night, my wife and I took our kids to the Train, Fray, Matt Nathanson concert at Walnut Creek Amphitheatre in Raleigh, North Carolina. This is the 2nd concert my daughter has been to but the very first concert that my 2 boys have been to. I am so excited to have been there for their first concert!

I am super nostalgic about the first concert I went to.

The year was 1985. The place? Valley Forge Music Fair. The band? Kool and The Gang. That’s right. Could my parents be any cooler that the first concert I ever went to in my life was Kool and the Gang? I was 9 years old. 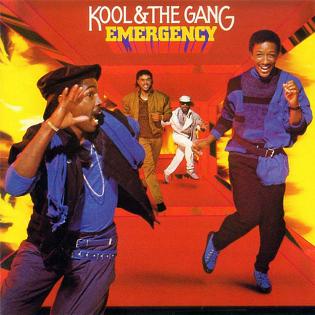 Let me start by giving you a better idea of what era Kool and the Gang we are talking about here. This concert was the Emergency Tour of 1984-1985. This is way past the Jungle Boogie disco era or the early 80’s R&B of Celebration. This was a re-invention of the band! This album had Fresh and Misled and Cherish. Check it out:

The place was The Valley Forge Music Fair. A 3000 seat theater with a rotating circular stage! That’s right people, every seat was a center seat (at least for a brief moment in the rotation). P.S. Don’t F up the rotation. This venue closed in 1996 but I saw 3 concerts there and countless theater productions.

I remember 3 specific things about that night.

The first thing I remember is that when Kool & the Gang played Celebration, there was a marquee above the stage that flashed clear round bulbs of lights like it was coming out of Studio 54. The crowd erupted! People jumped out of their seats to clap and shake their butts. And my sister (who was 6 at the time was asleep through all of it.)

The second thing I remember is my favorite Kool & The Gang song at the time was “Joanna” and they didn’t play it. I was super bummed. I remember telling my parents in the car ride home after the concert that I was sad they didn’t play it but the reality is the main reason I was upset was it was the only song I knew all the words to.

The third thing I remember about my first concert was the most vivid. Not only was it my first concert, it was my first concert t-shirt! First off, it was huge on me (they didn’t have kid sizes). Secondly, we didn’t get it until the end of the concert and they ran out of the one I really wanted. The one I wanted was this one: White, logo, and the pure 80’s style “Fresh” lettering. 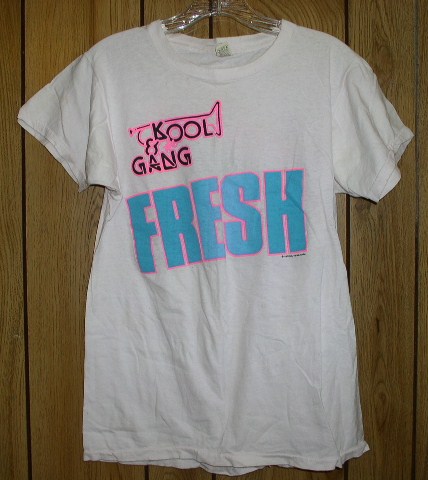 Unfortunately, the only one they had was the same design but in a really weird yellow. But I rocked the yellow shirt instead of the white one like it was nobody’s business which in hindsight, given my Chinese ethnicity is pretty ironic.

You always remember your first

My first priority was to take them to get their first concert shirts. Even though they were $30-35 each (yikes!) it was worth it. We had lawn seats so we walked over to claim our spot once we walked through the gates and then as my wife stayed with the blankets, I marched the kids over to the Merch tent. On the way I told them 3 things:

“I remember getting my first concert shirt and I hope you do too.”

“Always get a shirt with the tour dates and cities on it.”

“Always head to the merch first to make sure you get what you want before it sells out.”

I dropped $100 for 3 shirts but made a lasting memory.

We saw 3 bands. They all played their hits but it was great to see our kids actually listen to new songs. One of the things that I have hated since the beginning of Napster/iTunes is the ecosystem of music slipping back into the idea of selling single songs not full albums. Our kids will never have the satisfaction of popping in a cassette and listening all the way through while reading along in the liner notes.

I remember the first time I bought Jane’s Addiction Ritual de lo Habitual and having to listen all the way through to get to Been Caught Stealing. Now you just buy the one song. Maybe that’s old man thinking but I don’t like it! Get off my lawn!

Anyway, here’s a scenario where artists are playing songs you haven’t heard yet and the kids have nowhere to run or hide or hit next song. And an extra bonus was Matt Nathanson played a cover of James’ Laid and my wife and I were in absolute heaven as James is our favorite band.

@mattnathanson props for rocking out Laid by James. Made our night!

Hearing 3 bands is tiring enough but to have a 7:00 PM start time on a school night can take it’s toll. My little guy almost made it all the way through but with the encore starting past 11:00PM he couldn’t hang on until the end. Thinking back on my sister falling asleep during “Celebration” it was funny to see this dude sleeping during “Hey Soul Sister”! 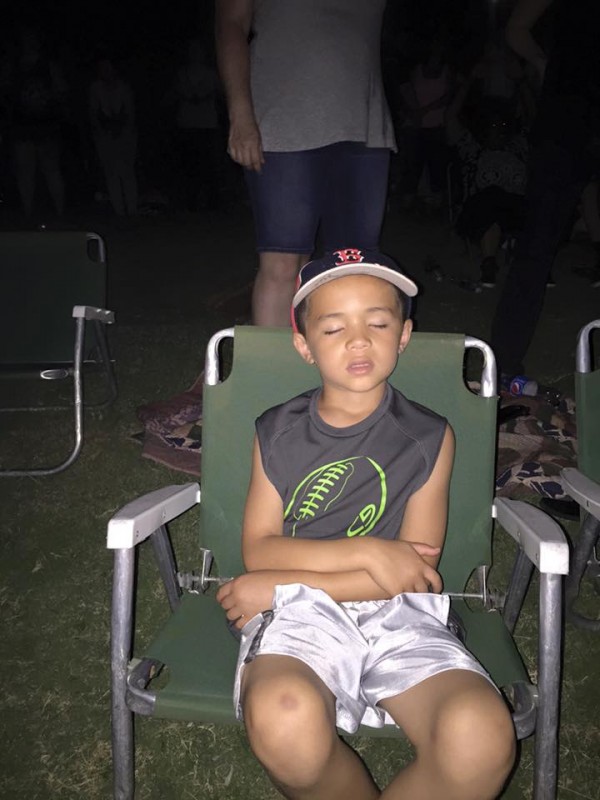 You remember your first too, don’t you.

I don’t think I’m alone in being super nostalgic about the first concert I attended. It is a new experience that not only says a lot about your past but also about your present. I may not remember every single detail about every concert I have been to but I certainly remember a lot. I may not remember the actual date or even the actual year, but I do remember the significance of things. Here is my self-indulgent list of significant concert moments in my lifetime:

• Seeing Chris Isaak literally break down crying on stage and walk off after 3 songs during his Forever Blue tour.

• Seeing Guns N Roses, Metallica, AND Faith No More at the Philly Spectrum

• Being at The Strand in Providence when they filmed the Mighty Mighty Bosstones Don’t Know How to Party Video.
Here’s a screenshot of where I appear (almost getting hit in the head by a stagediver. I had a couple of stage dives that I was super proud of that night but they didn’t make the cut 🙁 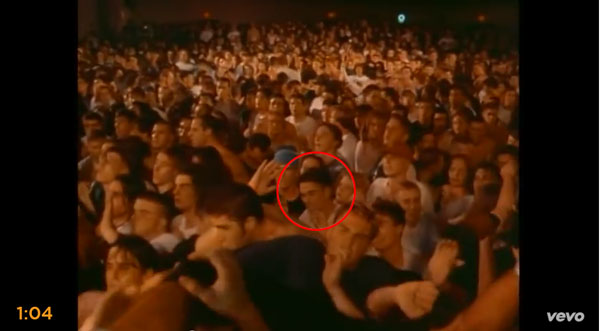 • Falling on my tailbone while crowdsurfing at a Rancid concert in Providence, RI

• The time someone threw a shoe that hit Noel Gallagher in the face during an Oasis concert in Providence, RI

• Getting nosebleed seats to see the Grateful Dead at the Spectrum in Philadelphia even though I didn’t like their music (still don’t) but wanted to see them before they broke up.

• Seeing Rage Against the Machine come out naked at Lollapalooza instead of playing one note.

The list can go on and I imagine everyone has a laundry list of concert experiences. For me, they provide a timeline of my youth. I can still smell the smoke or see the lasers or hear the chants.

I asked my Facebook friends about their first concert and the comments came rolling in! I invite you to join in the discussion!

Remembering your first concert is not something you have to look up or think hard about. It’s a memory. A memory that I hope my kids look back fondly on.

4 thoughts on “My first time.”