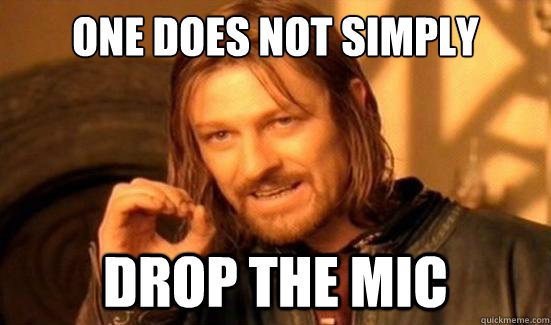 Imagine you are watching your favorite TV program and you see a commercial for a new frozen pizza line that has a bacon weave for a crust. Who is the first person that you think to tell? The odds are you probably thought of me. I am after all, the self-proclaimed “Frozen Food Master” not to mention someone that has carefully spent the last 6 years promoting a brand that endorses and promotes any type of irresponsible food item. This was by design.

When I set out to start Freezerburns in October 2008, I set out to not only start a webshow but to own the niche. I did this by producing frequent, focused, SEO-rich content. I gained success! First through viewers and then through real sponsorship dollars. For those who know me, I have become synonymous with “frozen food”. I accomplished my goal of owning a niche, building an audience, and selling sponsorships. It is for this reason that I have decided to move on to another project.

I quit before. Am I really serious this time?

I know, I know. You may be saying, “Didn’t you quit and come back 2 years ago?” In December of 2012 I decided to quit Freezerburns. I left. I started this very blog. It felt awesome. Then 6 weeks later I was presented with an opportunity that I couldn’t pass up so I came back. I know it sounds cliche but that was a different time and I left for a completely different reason. In the last couple of months I have had a few moments of clarity that have convinced me that even though the money is easy and good, continuing to do it is not the right decision for me anymore. Before I get to those moments of clarity, let me first talk about my 2014 goal.

On New Years Day 2014 I set out to produce a video every single day in 2014. I did this for a number of reasons. I wanted to see if I could figure out the true drivers of YouTube engagement and channel optimization.The hypothesis that I had was that posting every single day builds a content consumption appetite that shows positive metrics in every metric that was important to me. Those were: Subscribers, Views per visit, total video views, minutes watched per video, revenue per video, and total revenue. After only one month of producing videos daily, I proved this hypothesis. I was increasing video views exponentially. I had created appointment television! My fans were telling me that they were staying up to watch my latest video (which I published at 12:30AM EST every day).

I also wanted to see if I could optimize my process for shooting, editing, publishing, and community engagement per video. I had a deadline every day so this meant always thinking about what my next video would be. It meant shooting at every meal and ganging up production of multiple videos for times when I was traveling on business or going on vacation, etc. I had the process down because it was a necessity for me to be efficient. I produced a video 244 days in a row and I could have kept on doing it for the rest of the year and forever after that if I wanted to.

“I learned how to game the system and I didn’t like the person it turned me into.”

Revenue was increasing and the time to publish was decreasing. Life should be good right? The truth is it isn’t that simple. I learned how to game the system and I didn’t like the person it turned me into. I had 3 distinct moments of clarity that as usual occurred to me during a run. (Don’t they always?)

The first moment of clarity came to me when I realized that my target audience was closer in age to my daughter than they were to me. This isn’t a problem if I was setting out to produce quality, educational, content for teenagers. It’s sorta feels “ickier” when it means they are listening to me review an after school snack.

The second moment of clarity can best be explained by paraphrasing Matthew McConaughey in Dazed and Confused:

“I keep on getting older but my audience stays the same age.”

The truth is my target audience is college kids. Always has been, always will be. I could have evolved my show to review more sophisticated, healthier options to attract an older audience. The problem is the more profitable YouTube audience doesn’t want that type of food. I have many data points that point to the fact that if I reviewed a gluten-free vegetarian skillet meal it would get 1/3 the views of a review of a Hot Pocket or a Pizza Roll. I knew this data and I continued to make the decisions to review stuff that i knew would get views. And most of the time this meant eating stuff that just isn’t good nor consistent with the way i want to eat.

The third moment of clarity for me is perhaps the straw that broke the camel’s back. I was out for dinner with my wife and I after looking at the menu, I wanted a salad but ordered a “Bacon Cheeseburger on Steroids” because I knew my audience would want to see it. It was at that instance that i knew my webshow business life was creeping into my personal life.

I had these moments of clarity 3 months ago. Since then day in and day out I kept on producing videos. But last week something interesting happened during one of my reviews. I had THE moment. To be honest, I am so glad that I captured it on video. I was reviewing a Kid Cuisine meal and realized that not only was it horrible, I couldn’t possibly bear to associate myself with it. I took a bite. I started to describe it and review it. I paused and looked down. I ranted a bit. I walked off.

“…not every amazing moment has to be planned.”

Consider it my ultimate mic drop and actually a fitting end to the series. In the end, after reviewing over 1000 food items across over 800 videos and nearly 700 official episodes I decided we should not be eating any of this after all. Never in a million years did I ever think I would finish off the series this way but not every amazing moment has to be planned. Here’s an excerpt.

I always have a ton of ideas floating in my head and a number of them have some strong potential of being my next project. Of course I will share them when it’s ready to be shared. What i do know is it will be video and it will not be a food show or with me reviewing anything. I will be focusing on projects with me behind the camera more than in front of it. September is Hunger Action Month and I will be focusing my efforts on the short term highlighting the hunger issue in North Carolina and promoting the 3rd Annual 24 Hour Food Bank Telethon that I will once again host this September 26th.

I want to take the time to thank everyone that has supported Freezerburns all of these years. Like Chelvis: The Chinese Elvis, Noodad.com, Full Fontal, The Litterati, GetContagio.us, Iambic Spamtameter, From Dad to Me, and Fresh Cuts from the Audiobarn before it, I hope that Freezerburns will be remembered as “one of the many great ideas Gregory Ng executed in his career.” (Mad bonus points if you remember all of those past projects of mine)

Hear that noise? That isn’t me “being best buds to your tastebuds”, that’s me dropping the mic.

Indoor Skydiving in North Carolina!
The Art of the Brick at the Alamance County Arts Council
Fort Frederica National Monument is the National Park Site You Need to Visit with Your Family
The French, the Spaniards, and a 6 Pounder Cannon!
Prepping for the Great Smoky Mountains: Our next National Park Trip
10 Crucial Tips for Snow Tubing at Hawk's Nest in North Carolina

7 thoughts on “The Mic Drop Moment”